I recently went to Las Vegas, Nevada with my parents. I had been once before when I was younger but I didn't remember much of anything except how everything seem "HUGE".
Today Vegas is much of the same as I remembered it. The hotels and casinos were huge. I felt like each were individual cities with places to eat, sleep, and play (meaning loose money). Although we tried to take in more than the casinos, it was hard because everything else costs lot. If you weren't shoving your money in machine with no chance at anything coming back at you, then you could throw your money into something else that was happening.
Although my peers told me, "You don't do Vegas with your parents, because it is all about drinking." I must say they are right if I that was all I wanted to do on a vacation, but I am much more an active tourist. It was hard to want to watch down the street because either porn was being handed to you or you were stepping in someones vomit from the night before.
Much to say I am not a huge fan of the "little place of everything" which Vegas imitates. I want places to form their own identity that I can remember when I go away from a place. Overall I had a good time in Vegas, I spent time with my parents and was able to throw a few of their quarters into the toilet. 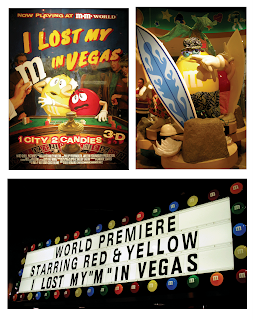 The entire time we noticed that about 3 out of 5 people would have a sack (errr I guess they are called bags) from M&M World. My mother did not want to be left out of this trend, so hiked our way down there. Once inside were we disappointed from avoiding the porn handouts for the small store, only then did we discover it was 4 stories and it was no wonder why it seemed everyone on the streets had bags from there. There was so much of anything you had to buy something. My mom settled for selecting for own colors of M&Ms (9 bucks a pound) but she really only got about a dollars worth. But all in all... we came out with our own small yellow bag M&M WORLD -Orlando.
Posted by Nell at 5:01 PM